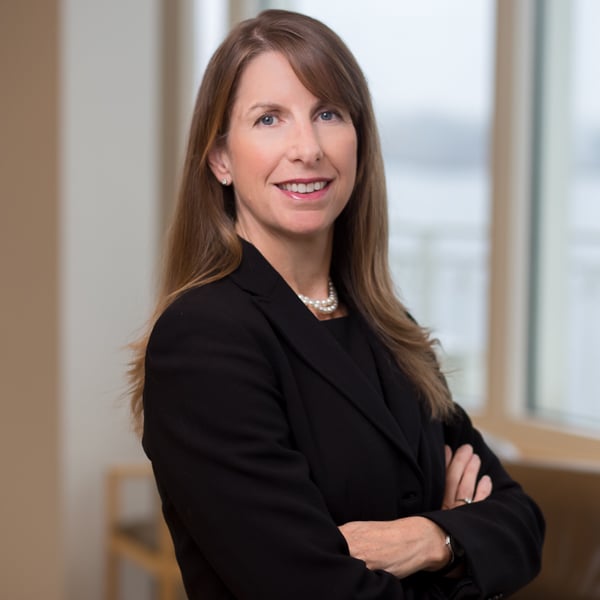 Ms. Vandersteel is the head of GMO’s Emerging Country Debt team. Prior to joining GMO in 2004, she worked at J.P. Morgan in fixed income research developing quantitative arbitrage strategies for emerging debt and high yield bonds. She began her career at Morgan Guaranty Trust, attending Morgan Finance Program #18, before establishing her career in emerging debt. Ms. Vandersteel earned her B.A. in Economics from Washington & Lee University. She is a CFA charterholder.

By moving our USD emerging debt strategy benchmark to the diversified (issuer-capped) version of J.P. Morgan’s EMBIG benchmark, we will limit our exposure to the ballooning issuance of low-return-potential, opaque countries. Our objective is to retain the “high dividend sovereign equity” nature of this asset class for our investors rather than accept low returns in lending to these “high quality” countries who then compete with us in lending to traditional emerging country borrowers offering higher return potential.

Since inception, GMO has positioned the EM external debt asset class as “high dividend sovereign equity.” In other words, EMD is a risky asset class and ought to compete with other risky assets held in one’s asset allocation portfolio. Indeed, over the last 25+ years, the high-risk, high-reward nature of the asset class has delivered handsomely (see Exhibit 1). EMD being defined by a country’s income status rather than its credit rating has meant that, over time, the market-cap weighted EMBIG has drifted up and down around the typical investment-grade/sub-investment grade divide.

More recently, with the rise of China and last year’s inclusion of higher-income Gulf Cooperation Council (GCC) countries into the benchmark (see Exhibit 2), the ratings composition has drifted upward, with 24% of EMBIG now A/AA-rated. From an alpha perspective, such issuers comprise some of our largest underweights given: 1) pronounced relative uncertainty about their published fiscal statistics in the context of low spreads; and 2) high indirect portfolio exposure to these countries stemming from exposures to other, higher-yielding EM countries. Therefore, we have decided to move to the “Diversified” version of the EMBIG benchmark, which caps larger issuers, thus bringing the benchmark more in line with our strategy.

Our proprietary credit score aligns with the ratings agencies in assessing China, Saudi Arabia, and the other high-income/highly-rated GCC countries as very high-quality credits, given the published fiscal and other statistics we and the agencies use to assess countries. Low credit spreads align with this assessment. However, we also note that the uncertainty of the published figures is extraordinarily high, with transparency levels of these countries among the worst in our universe.

As of December 2019
Note: GMO’s Proprietary Credit Score incorporates measures of fundamental credit quality. The rating band denotes rough mapping of where public ratings would map to our Credit Scores.

Another feature of these countries, given their geopolitical aims, is that they are regular lenders to other, generally higher-risk/higher-reward countries in our investment universe. 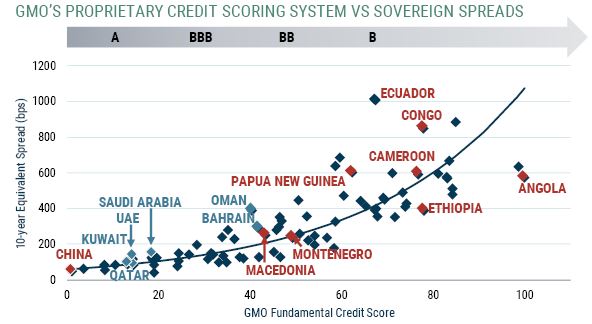 As of December 2019
Note: GMO’s Proprietary Credit Score incorporates measures of fundamental credit quality. The rating band denotes rough mapping of where public ratings would map to our Credit Scores.

As dedicated EM debt investors, given the relative spreads on A/AA-rated issuers, we’d rather lend directly to the lower-rated issuers than lend to the A/AA-rated ones only to see them on-lend the funds at higher rates. In other words, we’d rather take the direct exposure to the more classic EM countries than take indirect exposure via these highly-rated, opaque ones.

One way to limit our portfolios’ exposures to these A and AA-rated issuers is to switch to EMBIG Diversified, which caps the larger issuers in the benchmark. Given the trajectory of issuance by A- and AA-rated issuers, coupled with the huge potential global demand by Global Aggregate (IG)-benchmarked investors, we believe the headroom for issuance by such issuers to be large. Given our relatively small market, an uncapped benchmark has the potential to be overwhelmed by such issuers, changing the “high dividend sovereign equity” nature of the asset class. Therefore, we plan to switch to EMBIG-D in 2020 to limit the potential for such an evolution. Currently, EMBIG-D has these issuers capped at 20%. Assuming relative spreads remain as they are, expect our portfolios to continue to underweight such issuers, meaning that they will have a larger ratings differential versus the benchmark than has been the case before such issuers became so material.

1Carl Ross's July 17, 2019 piece on Gaming Out Sovereign Default When China Is A Major Creditor

The views expressed are the views of Tina Vandersteel through the period ending January 2020, and are subject to change at any time based on market and other conditions. This is not an offer or solicitation for the purchase or sale of any security and should not be construed as such. References to specific securities and issuers are for illustrative purposes only and are not intended to be, and should not be interpreted as, recommendations to purchase or sell such securities.