Second quarter returns in emerging debt – +12.3% for EMBIG-D and +9.8% for GBI-EMGD – represented a partial recovery from the first quarter rout. As it became clear that monetary and fiscal stimulus in the developed world would be maintained for an extended period and many countries had made progress in slowing the spread of the virus, EMBIG-D spreads fell by 152 bps to 474 bps, while GBI-EMGD’s FX rose by 4.1%, and local bonds by 5.0%. U.S. Treasury yields were virtually unchanged.

As we enter the third quarter, our valuation metrics for emerging external debt are less compelling than they were at the beginning of the quarter, due to the rally. While valuations remain well within the historical range that we would consider attractive, they are significantly less attractive than what prevailed at the end of March, right around the peak of the sell-off. Emerging currencies still stand out for their attractiveness. In addition, despite the rally in local interest rates in Q2, real interest rate differentials between emerging and developed markets remain consistent with recent historical norms. In other words, rates rallied nearly everywhere, so relative value did not change much.

In this piece, we update our valuation charts and commentary as well as introduce metrics for the attractiveness of EM corporates.1 More detail on our methodology is available upon request.2

The EMBIG-D benchmark spread tightened by more than 150 bps in Q2, paring the widening from Q1 by nearly half. As seen in Exhibit 1, the multiple of the benchmark’s credit spread to the spread that would be required to compensate for credit losses fell over the course of the quarter. That multiple stood at 3.4x on June 30, 2020, down from the sell-off peak of 7.2x on March 23. This remains well within the range that we would consider attractive, based on the historical experience, but it is significantly less attractive than what prevailed at the end of March, right around the peak of the sell-off. 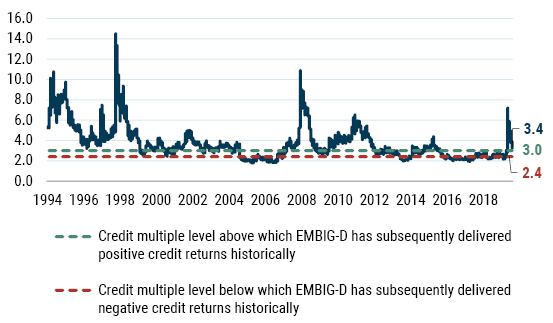 As of 6/30/20 | Source: GMO calculations based on Bloomberg and J.P. Morgan data

In addition to the spread tightening, the multiple fell because of an increase in its denominator – the fair value spread or expected credit loss. This value rose from 112 bps at end-March to 138 bps at end-June. Regular readers will recall that this fair value spread is a function of the weighted-average credit rating of the benchmark, along with data and assumptions on rating transition probabilities and recovery values given default. In terms of the second quarter, the fair value spread was influenced by S&P’s placement of Argentina and Ecuador on selective default, among other rating downgrades. South Africa, Sri Lanka, Costa Rica, and Bolivia were also among those included in the wave of emerging market downgrades during the quarter. Additionally, a handful of other countries are either in default or in various stages of restructuring talks, including Belize, Lebanon, Suriname, Zambia, and Venezuela.

The preceding was a discussion of the level of spreads, or credit cushion. From a total return standpoint, the level and changes of the underlying risk-free rate also matters. In the second quarter, U.S. Treasury yields were basically unchanged, with the 10-year yield falling by 4 bps and having little impact on benchmark returns. We measure the “cushion” in Treasuries by the slope of the forward curve of the 10-year swap rate, depicted by the light-font lines in Exhibit 2. The interest rate “cushion” (which we proxy as the slope of the forward curve) continues to be low by historical standards, meaning a sharp rise in the 10-year Treasury yield would be a surprise to the market. The slope of the 10-year forward curve ended the quarter at 28 bps, higher than the 18 bps of the prior quarter. We would view this as a slight positive relative to the previous quarter. Notably, the empirical interest-rate duration of the benchmark has been falling as risk-free rates respond more to central bank activity than to the broad recovery in the economy or risk assets.

It is important to note that bid-ask spreads tend to revert to a standard level (historically, 0.8%) after widening during times of crisis, and this time appears to be no different. In Exhibit 4 we see how bid-ask spreads behaved during such events as the Mexican peso crisis (1995), Russian financial crisis (1998), and the Global Financial Crisis (2008), and their following stabilization. From the pinnacle of the Mexican peso crisis in January 1995, it took roughly about 6 months before bid-ask spreads stabilized, and roughly 1 year for bid-ask spreads to stabilize following the Russian financial crisis and the Global Financial Crisis.

We continue to believe that the stabilization of bid-ask spreads following the impact of the Covid-19 pandemic and oil shocks will be quicker relative to prior crises. Our strategy focuses on instrument selection and tends to own securities with a lower liquidity profile than the benchmark. We are long-term oriented investors and liquidity providers in this type of market, and our process is able to identify dislocations and opportunities to pick up attractively-priced securities. This approach positions us well for alpha versus the benchmark going forward.

Exhibit 5 provides a time series of our model’s estimate of the GBI-EMGD’s spot FX valuation. Recall that our model analyzes trends in macroeconomic fundamentals such as balance of payments composition and flows, valuation of the currency, and the economic cycle, and uses a regression analysis to produce an estimate of total expected FX returns for each country in the GBI-EMGD benchmark. These are then combined into a single value of a total expected FX return using a market cap weighted average of currencies in the GBI-EMGD. We then deduct the GBI-EMGD weighted carry from the estimated GBI-EMGD weighted value of total FX expected return to get to an expected EM FX spot return. Finally, we estimate a neutral range based on the backtest of the overall model to assess whether EM currencies are cheap, rich, or fairly valued. A value that is higher (lower) than the upper (lower) value of the neutral range could potentially indicate “cheap” (“rich”) currencies. A value that is within the neutral range would be considered “fair.” Based on our framework, EM currencies remain attractively valued relative to the past 10-year average, and even higher than the peak reached during the 2008 financial crisis.

As for emerging market local interest rates, we consider differentials in real yields to gauge the relative attractiveness of EM against developed markets (see Exhibit 6). In this regard, the story that has been in place for many quarters (years, actually) remains as we can still see a substantial positive gap between EM and developed market real yields. That gap decreased during the second quarter as emerging real yields fell by 26 bps to 1.98% from 2.25%. The fall in real yields came from a rally in most nominal yields given the snapback from the March sell-off, though inflation forecasts also came down in most emerging market countries as global demand is expected to fall dramatically. The spread between EM and U.S. real yields has tightened during the quarter, to 234 bps. While this spread had been fairly stable for several years running, the 5-year average of this spread rose to 218 bps from 214 bps at the end of Q2. By our calculations, the real yield in the U.S. rose to -0.4% in June from -1.0% in March, and while the European real yield remains firmly in negative territory, the Japanese real yield turned positive for the first time in more than 5 years.

Opportunity in Quasi-Sovereign vs. Sovereign

During the quarter, country-matched quasi-sovereign spread over sovereign tightened by 132 bps to 220 bps. Notable total return contributors to this tightening were Kazakhstan’s KazMunayGas, South Africa’s Eskom, Peru’s Petroperu, and Bahrain’s Oil & Gas Holding Company. Notable detractors were China’s Chengtong Holding, JSC Investment, and Development Bank, as well as Panama’s International Airport. Chile’s Codelco and Indonesia’s PT Pelabuhan both had a one-notch downgrade to A and BBB-, respectively, independent of their sovereign rating changes. Panama’s International Airport had a two-notch downgrade to BBB-, also independent of its sovereign. South Africa’s Transnet, on the other hand, followed its sovereign with a one-notch downgrade to BB-. ESKOM, the other South African quasi, remained unchanged at CCC+. The portfolios used the spread widening that occurred during the Q1 sell-off to increase their weight to some of these quasi-sovereigns. 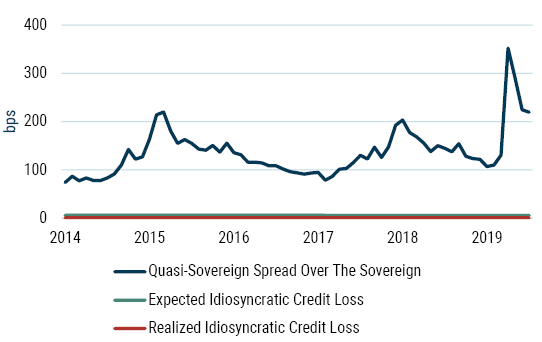