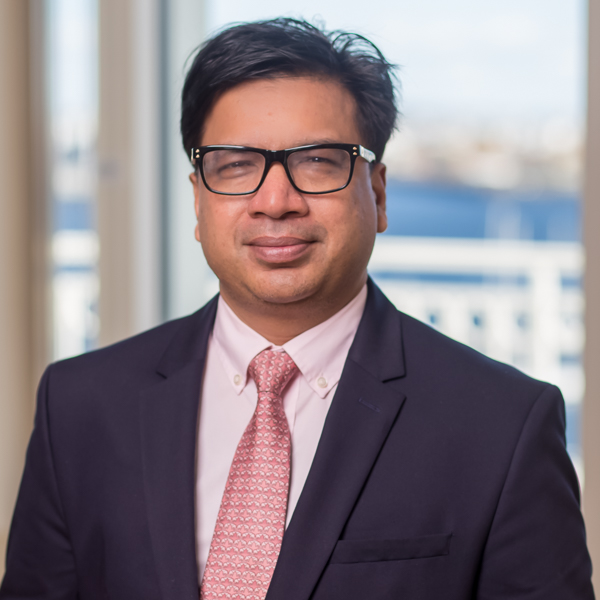 Mr. Bhartia is a portfolio manager who was previously a member of GMO’s Emerging Markets Equity team. Prior to his tenure at GMO, he worked as an investment advisor in India. Mr. Bhartia earned a Bachelor of Engineering at the University of Bombay and an MBA at the Institute for Technology and Management in Bombay. He is a CFA charterholder. 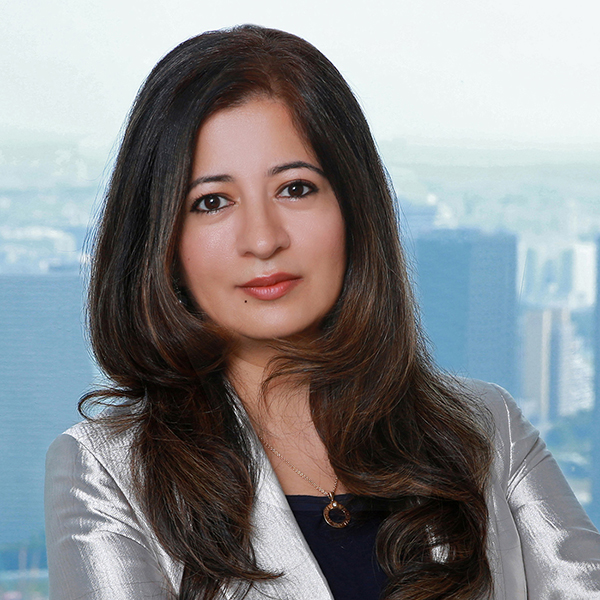 Ms. Dua is engaged in client relations and business development for GMO’s Global Client Relations team located in the Singapore office. Prior to joining GMO in 2015, she was a Vice President at PIMCO in New York where she was responsible for coverage of corporate clients. Previously, she was an investment banker at Goldman Sachs & Co. in New York and London and has also worked at HSBC. Additionally, she has served as a consultant to the World Bank. Ms. Dua holds an MBA from Harvard Business School, a B.A in Politics, Philosophy and Economics (P.P.E) from Merton College, University of Oxford, and a B.A. in Economics from Lady Shri Ram College, University of Delhi. She is also a Rhodes Scholar (Oxford, 2002). 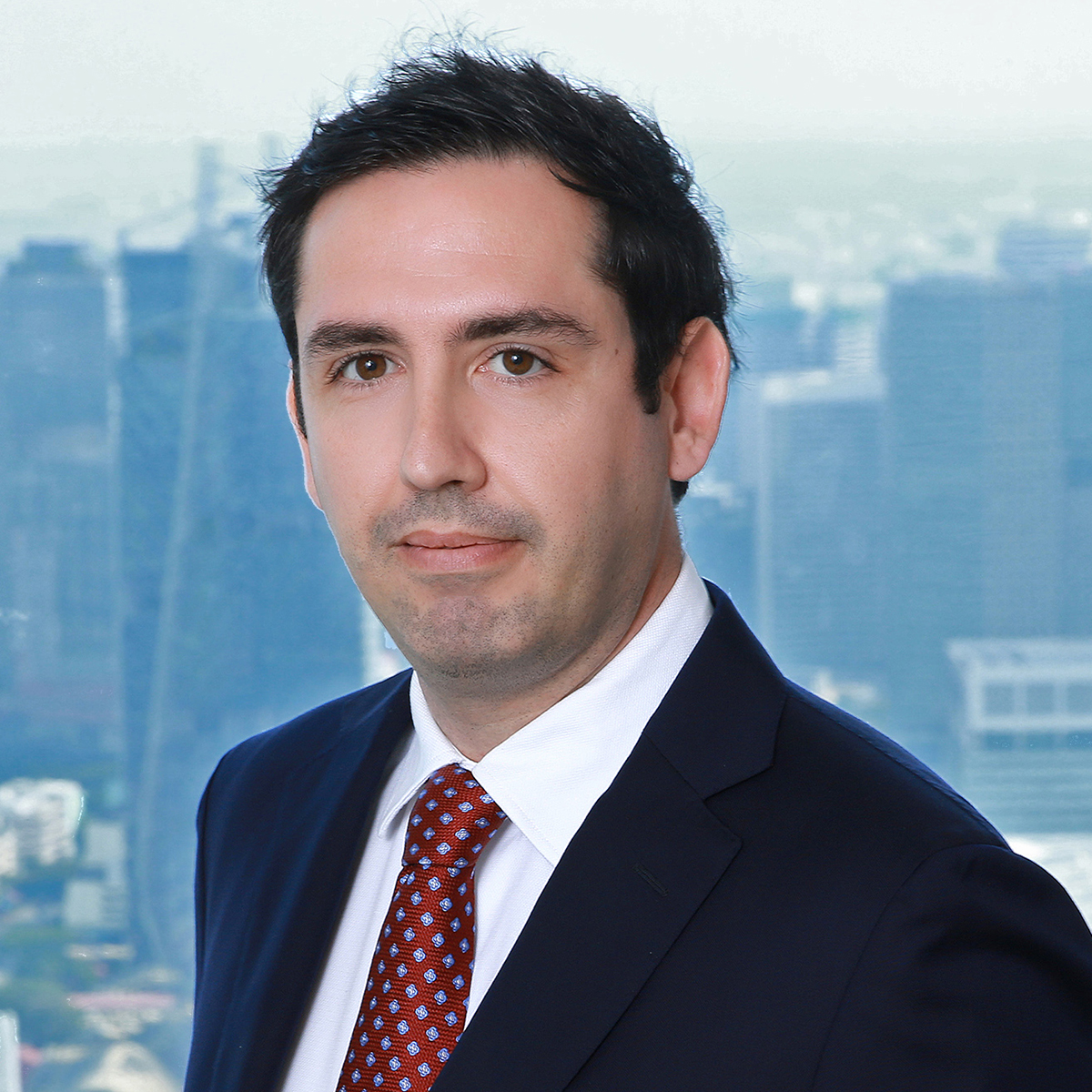 Mr. Pascual is engaged in fundamental research for GMO’s Emerging Markets Select Equity team. Prior to joining full-time in 2014, he was an intern on the team. Mr. Pascual earned his Licenciatura in Economic Analysis from the Complutense University of Madrid as well as his Master in Public Policy and International Development Economics from Tsinghua University, Beijing. 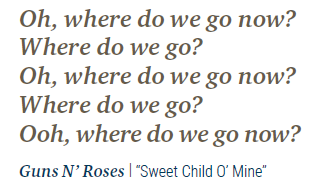 This paper highlights five reasons why Emerging Markets (EM) in aggregate are more resilient today than in prior periods. A “healthier” index composition in addition to four other reasons support our analysis that EM drawdowns will be significantly more muted than previous peak- to-trough drawdowns. The 30% rebound that the asset class has experienced since its trough in late March is in line with our thesis of a more robust index. In GMO’s recent Quarterly Letter, Ben Inker, Head of our Asset Allocation team, made the case for emerging stocks given their lower relative valuations.

We acknowledge the heterogeneity of the asset class but take comfort in China at 40% of the MSCI EM Index being resilient, with better growth prospects and plenty of residual dry powder. Not only has the weight of cyclical sectors like Energy and Materials shrunk (from 30% to 12%), there has also been a significant improvement in their balance sheets. Some domestic consumer-driven and growing sectors such as Information Technology and Internet/Media names are now nearly one-third of the index. In our April 2020 paper, “Covid-19: Risk and Resilience in Emerging Markets,” we provided a framework to assess the most vulnerable EM nations and those best placed to emerge less scathed than others from the pandemic. We identified only 9% of emerging countries as high risk vs. 66% as safe countries.

However, the EM asset class is innately characterized by risk – this paper discusses five such risks and cautions of other uncertainties that can morph into risk. While some traditional risks have abated, we discuss tensions from a renewed U.S.-China trade war, domestic power struggles in some of the larger EM countries like Brazil and India, constraints on the coffers of EM governments, and both currency and concentration risk. As we construct our EM portfolios today, we strive to take advantage of the lower volatility of the asset class while maintaining a defensive stance to mitigate the heightened risks in today’s environment. Net/net, however, we believe many of the EM-specific risks are navigable.

Table 1 highlights peak-to-trough drawdowns in previous periods of market uncertainty and the time taken to recover. Despite the impact of the current crisis on GDP likely being the worst in decades, EM fell peak-to-trough by 33%. This time, however, not only is the drawdown lower, but the recovery has been faster than in previous crises – a 30% rebound from the trough in less than 3 months. 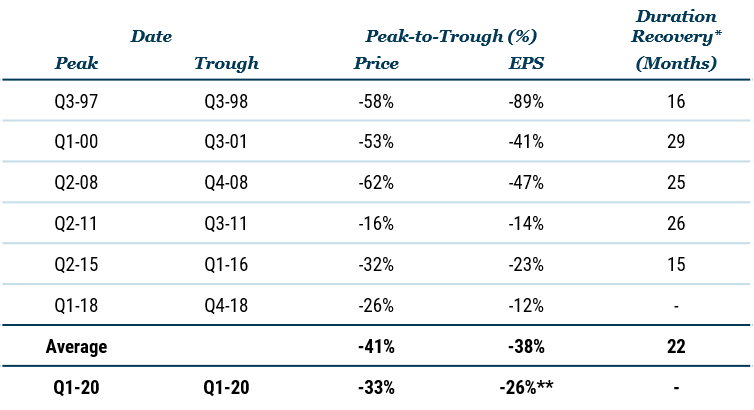 As of 5/31/2020 | Source: Bloomberg, GMO
* Months it took prices to return to previous peak from the trough
** Change in NTM earning estimates from peak

We believe there are five reasons that explain this less painful drawdown and suggest why “this time is different.”

#1: The weight of vulnerable countries in the MSCI EM Index has been significantly reduced

At approximately 40% of the index today, China has displaced the weights of vulnerable economies in the EM index. We identify “vulnerable” economies as those that are highly dependent on foreign savings and, therefore, more exposed to external outflows. In 2012, over 30% of the index was made up of 9 vulnerable economies including countries like Brazil, Turkey, and South Africa. Today, the impact of these vulnerable countries has waned because the weight of China has increased and macroeconomic fundamentals in some of these countries have improved.

Exhibit 1 shows the index weights of these vulnerable countries and China across time. The dominance of the “vulnerable” country bucket has historically led to higher volatility and risk contagion across EM.

#2: China, WHICH CONSTITUTES 40% OF THE MSCI EM INDEX, IS SAFER AND STILL HAS DRY POWDER FOR STIMULUS

Despite commonly predicted China hard-landing scenarios, we are less worried than most analysts. For the last three decades, China has shown that it has the fiscal and monetary wherewithal to rebound from temporary economic setbacks. In the last few years, China has transformed itself from an externally dependent economy to one in which the domestic consumer has begun to pick up much of the responsibility for stimulating the economy (see Exhibit 2). To contextualize China's growth with some numbers, let's look at the China Internet sector. At $1.4 trillion market cap, today the China Internet sector alone accounts for nearly half the EM aggregate market cap of a decade ago. Today, China's Internet sector is 17% of the MSCI EM Index while the BRICs countries (ex-China) are only 20% of the index.

We should not mistake the lack of China’s headline-grabbing stimulus plans to date as a signal of the State’s reluctance to use its resources. Exhibit 3 and Table 2 show that China still has the fiscal might to bail out its businesses and enterprise should it be necessary. It is likely, though, that a future stimulus will fall well short of the whopping 4 trillion RMB (>10% GDP) China announced during the GFC – a sum adequate to offer a lease not only to China, but also to much of the rest of the world. To date, China has spent only 5% of its GDP on fiscal stimulus compared to 11.5% spent during the GFC. For comparison, the U.S. has spent 13% of its GDP to date in response to Covid-19 compared to 6.5% spent during the GFC.

EXHIBIT 3: CHINA HAS PLENTY OF DRY POWDER TO INCREASE STIMULUS 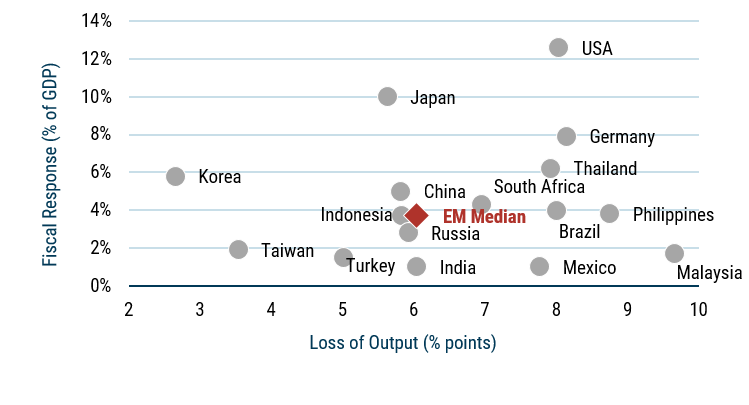 TABLE 2: CHINA HAS PLENTY OF DRY POWDER TO INCREASE STIMULUS

#3: Sector composition has moved from cyclical sectors to Information Technology and Consumer sectors

At the same time, as Exhibit 4 shows, the weight of Internet and Technology has steadily increased over the last decade and today accounts for one-third of the index.

EXHIBIT 4: FROM CYCLICAL TO TECH/CONSUMER SECTORS

#4: WHILE FINANCIALS REMAIN A SIGNIFICANT CONSTITUENT OF THE INDEX, THEIR “QUALITY” HAS IMPROVED WITH CHINA FINANCIALS ACCOUNTING FOR 36% OF THE FINANCIALS INDEX

With a market cap above USD 5.0 trillion and total assets of USD 67 trillion, Financials comprise the largest sector in the MSCI EM Index. Given the leverage endemic to these banks, it is critical to understand the innate risks of this group to better assess the asset class. While Financials have historically made up about a quarter of the index, their composition has changed over time as shown in Exhibit 5. One key change has been that the weight of banks in the “vulnerable” country group as described previously has reduced from 46% to 10% of MSCI EM Financials.

As of May 31, 2020, Chinese banks accounted for 36% of the Financials sector weight. We believe these banks are significantly less risky due to our more favorable macro-assessment of China as discussed above in addition to a number of other reasons (per UOB Kay Hian):

While there is an argument that banking systems across a broad set of geographies inherently represent some stress, we believe this is a diversified group and dominance of the Chinese banks mitigates much of this risk.

#5: ABILITY TO RESPOND TO COVID-19 AND HIGHER GROWTH PROSPECTS

In our April paper,1 we argued that the EM asset class is more resilient to the impacts of Covid-19 given the composition of the index today. Using several factors, we gave each country a Covid-19 “Risk Score” as well as a ranking for its “Ability to Respond” and rebound from the current crisis. Per Exhibit 6, our analysis revealed that today only 9% of EM countries are in the high-risk category.

Significant Divergence among EM Countries' Ability to Recover from Covid-19 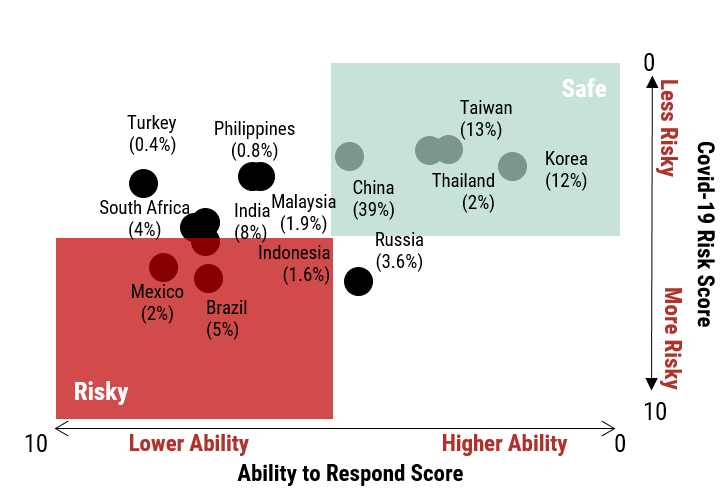 As of 5/31/2020 | Source: GMO
Percentages in parentheses are country weights in the MSCI EM Index.

The conclusions from this analysis lead us to believe that the countries in the “Safe” cluster will withstand the crisis better while the recovery and reopening of the economies in the “Risky” cluster will be more challenging (see Exhibit 7).

Exhibit 7: 66% OF EM TO HAVE HIGHER GDP GROWTH THAN DEVELOPED MARKETS

By virtue of a healthier index today, we believe certain innate risks that have previously characterized EM have dissipated. However, the asset class is inherently home to a number of unforecastable events that we must acknowledge. 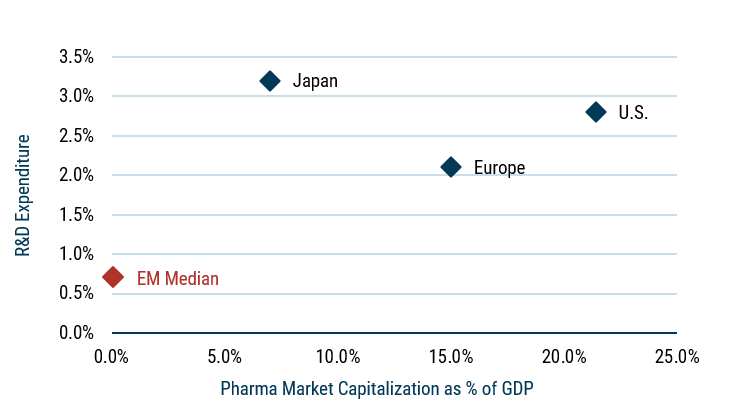 The data clearly indicates that the quality of EM earnings has improved significantly, resulting in a more resilient asset class.

At 40% of the index, we believe China is resilient and capable of long-term growth and capital appreciation. The index is more stable in its composition as sectors like Information Technology and Consumer Discretionary have become “core” and the weights of more cyclical sectors have shrunk. While Financials account for nearly a quarter of the index, the majority are “safer” Chinese institutions that have demonstrated their ability to preserve capital. Based on our research, we characterize only 9% of emerging market countries as high-risk while a majority (66%) of the index is in the “safe” cluster. However, given our analysis of the risks within the asset class, it is evident that some nations are better placed to withstand the current crisis. Today, despite the risks, our dedicated EM portfolios reflect the improved resilience of the asset class.